"Agroworld. The World of Farming and Animal Husbandry" (Malaysia) 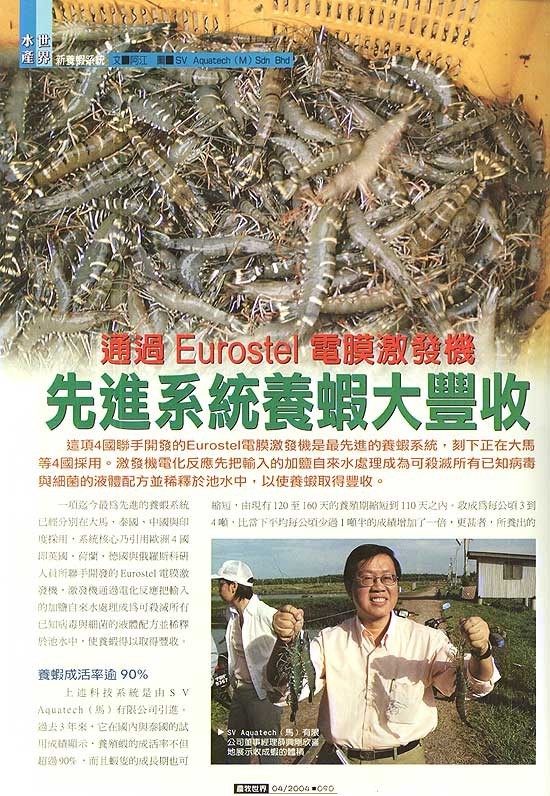 Translation from Chinese into English

The Envirolyte Generators, collaboratively developed by four countries, is the most advanced shrimp-raising system, which is now widely employed in four countries, including Malaysia. The Envirolyte Generator's electric performance is to firstly process the running water which is added with salt into the liquid formula which could kill and eliminate all known viruses and bacteria and then dilute it into the pond water, through which the abundant harvest of shrimps could be achieved.

A set of the most advanced shrimp-raising systems up to now has been adopted in four countries - Malaysia, China, Thailand and India. The core of the system is the Envirolyte Generator jointly developed by scientific researchers from four European countries - UK, Holland and Russia. The Envirolyte Generator's performance is to firstly process the running water, which is added with salt, into the liquid formula which could kill and eliminate all known viruses and bacteria and then dilute it into the pond water, through which the abundant harvest of shrimps could be achieved.

The survival rate of shrimp raising is over 90%

The above system is introduced by S V Aquatech (Malaysia). During the past 3 years, the tested results both domestically and in Thailand show that not only the survival rate of raised shrimps is over 90% but also growth circle of the shrimps could be shortened. The cultivation time could be shortened from the current 120 days or 160 days to within 110 days. And the harvest could be 3 to 4 tons per hectare, which has increased from the current harvest that on the average is less than 1.5 tons per hectare.

Words in the picture: The manager of S V Aquatech Mr. Simon Shih is happily displayed the harvest of shrimps. 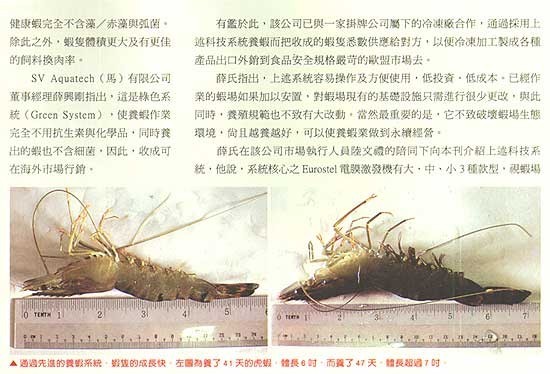 Words below the 2 Pictures: By using the advanced shrimp-raising system, the growth of shrimps becomes quicker. The picture on the left is the Tiger Shrimp that has been raised for 41 days and its length is 6 inches. And when the Shrimp is raised to the 47th day, its length has been over 7 inches as the picture on the right shows.

Besides, Algae/Red algae and/or any virus do not contaminate the raised healthy shrimps at all. Further, the volume of shrimp meat is bigger than before, which is the results of better conversion ratio of meat vs. feed.

The manager of S V Aquatech, Mr. Simon Shih, points out that this is Green System, which could ease the process of raising shrimps without antibiotics and chemicals, and, at the same time, there is no virus affecting the shrimps. All of these could lead to the overseas marketing and selling of the harvest.

Considering the above-mentioned, S V Aquatech has cooperated with a cold-storage plant who is the subsidiary of a licensed company in exporting all kinds of products made by freezing process to the European Union market that has the strictest Food Regulations. In this cooperation, S V Aquatech provides the harvested shrimps raised by this advanced system to the cold-storage processing plant.

Mr. Simon Shih also points out that the above system is easy and convenient to operate with low investment and cost. For the already operated shrimp-raising plants, only little of the existing infrastructure needs to be changed, if this system is to be applied. At the same time, there is no need to make big changes to the current scale of raising shrimps. Of course, most important is that this system is not going to destroy the biological environment of the shrimp-raising plants. On the contrary, the environment will become better and better, which could lead to the ever-continuous operations of the shrimp-raising industry.

Mr. Simon Shih made the above introduction of this advanced technological system to our publication accompanied by his company's marketing manager - Lu Wen Li. He said, The Envirolyte Generators could be divided into 3 models - big, medium and small, according to the different needs, which could be installed in the shrimp-raising plant by the cultivation personnel and could be put into operation immediately. 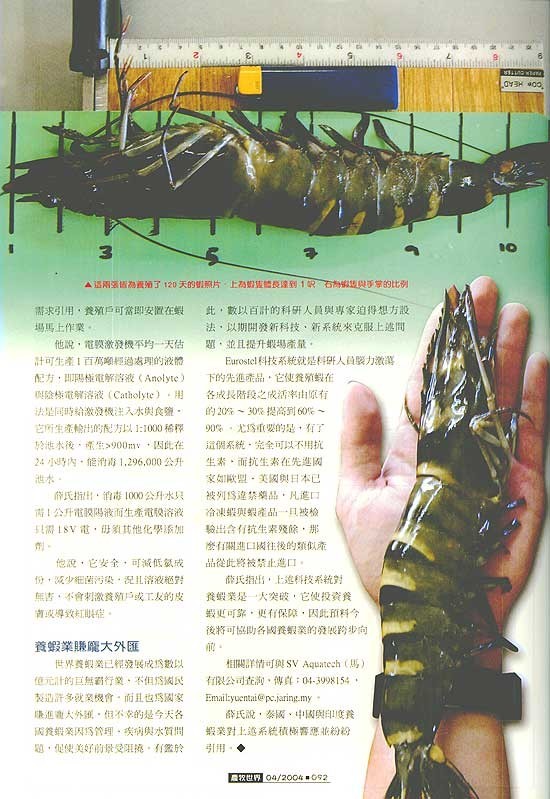 Words in Red: These 2 pictures are for the shrimps that have been raised for 120 days. The length of the above one is up to 1 ruler. The picture on the right is the comparison between the shrimp and the hand.

He said, as estimated, one Envirolyte generator could produce 1 million tons of processed liquid formula for one day on the average, namely Anolyte - oxidizing liquid & Catholyte- reducing liquid. The operation method is to add water and salt at the same time into the Envirolyte Generator. The outcome of its process should be put into the pond water at the dilution ratio of 1:1000. Therefore, within 24 hours, 1,296,000 liter of pond water can be cleaned and disinfected.

Mr. Simon Shih points out that to disinfect 1000 liter of water only 1 liter of Anolyte liquid by Neuroses generator is needed, which could be produced by only at 18 V of electricity, without any other chemical additives.

He also said that it is quite safe in terms of reducing chlorine (Cl) elements and decreasing the contamination of virus. Besides, the liquid is definitely harmless, which is not going to irritate the skin of the workers or lead to the disease of pinkeye.

The shrimp-raising industry could earn a lot of foreign exchange

The shrimp-raising industry in the world has developed into the greatest industry counted by billion of Yuan. It not only creates many employment chances, but also earns a large amount of foreign exchange for our country. But unfortunately, today the shrimp-raising industry in each country has been hampered for the reasons of management, diseases or the quality of water. Just because of this, hundreds of researchers and specialists have been trying hard to find and develop new technology, new system to overcome the above problems and to increase the production of the shrimp-raising plants.

Envirolyte technological system is the advanced product resulted from the surging of mentality of the researchers, which increase the survival ratio of the shrimps during their growing period from 20% -30% to 60%-90%. Especially, with this system, there is no need at all to use antibiotics that is strictly forbidden in the developed countries, such as EU, U.S.A, and Japan. Once it is detected that there is only a little bit remaining of antibiotics in frozen shrimps or other shrimp products, all these products from the exporting countries will be forbidden.

Mr. Simon Shih points out that the above technological system is a great breakthrough for the shrimp-raising industry. It could make this industry much more reliable and more secure. Therefore, it could be forecasted that this system could help the development of shrimp-raising industry of every country up to a new level in a cross step.

Mr. Simon Shih said, along with Malaysia, Thailand, India and China have given quite positive responses and have employed the Envirolyte generators in order to have abundant harvest.

The World of Farming and Animal Husbandry 04/2004